The Present Assam was referred to as Kamrup in many of the ancient Indian literature. It was also known as Pragjyotishpur due to the astrological (Jyotish Shashtra) practices that prevailed in this part of the country during that time. However, "Kamrup" became a more predominant name in the later part of the history.

Kamrup Metropolitan District is vulnerable to various hazards like flood, landslide, storm, riverbank erosion, urban flash food and water logging. Manmade disasters like fire incident (domestic and commercial), bombblast and road accident also occur from time to time. Besides, the entire district falls under seismic zone V. Out of these hazards natural flood and flash flood are annual disaster which occure in Kamrup (Metro) District every year. This plan focuses on mitigation, preparedness and operations and defines the characterization of responder agencies of the district from within and outside the government.

Flood occurs generally in the low lying areas of the district during the months of April to October every year. The occurrence of flood in the district is due to the river Brahmaputra and its Tributaries. During rainy days the city of Guwahati also witnesses localised flood due to poor drainage system of the city. Besides, the district is located in the most seismically active region of the country i.e. zone V and very vulnerable due to high density of population and urban conglomeration of non engineered or inadequately designed multi-storeyed buildings.

The district is bounded on the West and North by the Kamrup district and on the East by the Morigaon district. On the South, lies the state of Meghalaya.

R. Brahmaputra, Bharalu, Digaru and Kolong are the major rivers of the district. 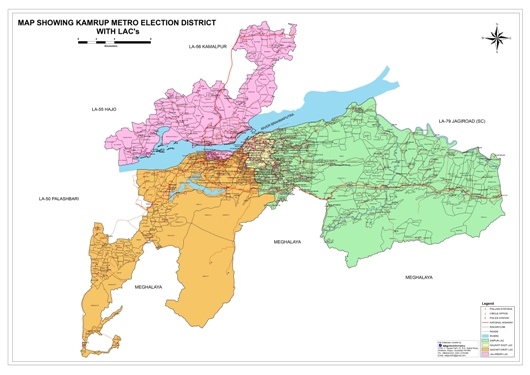